Welcome to the Wakefield MAG e-newsletter. If you can't attend our Wednesday meetings regularly, it's the next best thing to keep you up to date with what we are up to.

Check out the event report Here

Check out the event report Here

Check out the rideout report Here

A THINK! radio campaign has been launched to encourage drivers to take longer to look for motorcyclists after figures revealed that 30 bikers are killed or injured every day at junctions, Road Safety Minister Robert Goodwill has announced.

Launched on 21st July 2014, the 'Didn't See' campaign will run for 4 weeks until 15th August 2014 on national radio with the aim of reducing the number of motorcyclist and driver collisions on our roads.

Research for THINK! has shown that drivers believe the majority of motorcycle accidents happen because of bikers breaking the speed limit - but statistics actually show around half of motorcyclist accidents, where the rider is killed or seriously hurt, occur at junctions, with drivers failing to look properly being the most common cause. 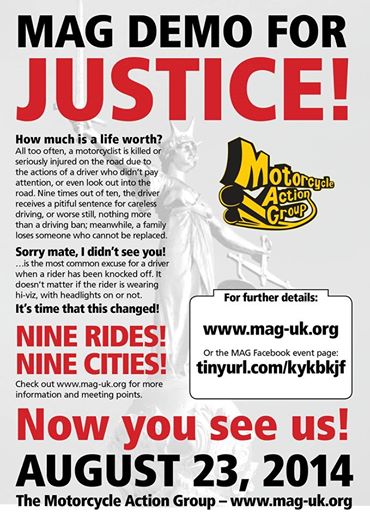 How much is a life worth?

Every day, a motorcyclist is killed or seriously injured on the road due to the actions of a driver who didn't pay attention, or even look out into the road. Nine times out of ten, the driver receives a pitiful sentence for careless driving after pleading guilty, or worse still, nothing more than a driving ban; meanwhile, a family loses someone who cannot be replaced.

Sorry mate, I didn't see you! ... is the most common excuse for a driver when a rider has been knocked off. It doesn't matter if the rider is wearing hi-viz, with headlights on or not. It's time that this changed!

The purpose of the demo is to raise awareness on the theme that too many riders are being knocked from their bikes; that drivers are being mildly punished or getting off free, and that we - every day - see that the errors of other road users are putting our lives at risk, while we are being popularly held up to blame. This year there have been even more deaths than usual, and it's our perception that the majority are due to driver errors and poor planning/maintenance. Our best political lobbying efforts on key issues have received lip-service and duplicitous underhandedness so it is time for action.

The demos will take place in at least nine cities, including London, Glasgow and Belfast. These will not be the usual demos you've seen from MAG recently. Every year, thousands of bikes gather in Brussels to protest at the EU parliament's scant disregard for riders' rights. (at the demo attended by MAG Chairman John Mitchell in 2012, over 7,000 bikes parked along the Rue de la Loi, outside the EU Parliament HQ) and it wasn't a silent protest. It's time us Brits took a leaf out of their book.

The Yorkshire leg of the demo will be held in Sheffield, starting from Meadowhall at 1:30pm. See the Event Facebook page for the latest details: https://www.facebook.com/events/612446855539004/

The Motorcycle Action Group (MAG) is deeply concerned by the dramatic fall in popularity of motorcycles among the young. According to DVSA data, just 353 young people in the 16 to 17-year-old age range took their A1 practical tests in 2013/14, plummeting dramatically from 3294 who took the test in the previous 2012/13 period, a decline of almost 90%.

The news confirms MAG's worst concerns about the effects of the cost, complexity and availability of the current motorcycle test. For years MAG has been in discussion with the government agencies responsible for determining the style and content of the test but has had to contend with extreme obstinacy from some parties within the Driving Standards Agency. Given the obvious benefits economically and environmentally that motorcycles can offer; it is irresponsible to discourage people from taking advantage of this transport mode. Motorcycles offer economic use of road space both when parked and when moving and can address the financial and mobility challenges of many people. Like bicycles, motorcycles are single-track vehicles and therefore enjoy the logic of geometry in utilizing spaces that are not available to twin track vehicles. They are part of an elegant solution to 21st century resource issues.

MAG calls on The Government to rethink its policy toward powered two wheelers and switch from discouraging to encouraging their use through a more reasonable licensing regime.

A couple of ePetitions you may want to sign if you agree with the aims/objectives of the petitions:

A cheap but dangerous form of road re surfacing is surface dressing, which is tar sprayed onto a poor surface and then left with loose chipping for months. Any that are not stuck down can cause a hazard to any road user. This is fastest and cheapest however due to the chipping it is definitely the most dangerous surface for any and all two wheeled vehicles. Riding on this surface is not only dangerous but does a lot more harm than good. This cheap and nasty surface isn't sustainable and has to be re-done often and has no benefit whatsoever. If your going to do a job you may as well do it properly!

This form of road surfacing needs to be banned from the UK roads. All drivers would much rather have a road closed for longer and be done properly, rather than having to drive through a minefield and causing their vehicle damage which can be costly. The state of our roads has been an ongoing issue in this country and needs to be addressed.

Balfour Beatty with the blessing of the Highways Agency has installed 10 miles of high tension steel wire carriage way separation. This type of of barrier will maim and kill motorcyclists, it has been banned in Denmark, it is fitted with further protection elsewhere in Europe, but here cos' it is cheap we get 10 miles of it. This has been taken up with the Highways Agency, Balfour Beatty and the petition authors MP, but could you please help by signing this petition:

Wayne Rooney, the Yorkshire Regional Rep has announced that he is not standing for re-election at the Yorkshire Region AGM in October, after two years in the post. There is therefore a vacancy for a Yorkshire Region Rep at the AGM (subject to being voted in by the membership). Duties include representing Yorkshire at the bi-monthly National Committee meetings in Warwickshire, and being the focal point for the very active Yorkshire Region of MAG. It goes without saying that this is a voluntary post for which you get no pay .... just the honour of representing God's Own County !!!

If anyone is interested, let me know and I'll give you more details of what is involved, or, contact Wayne directly at: yorkshire-rep@mag-uk.org

10) Forthcoming Events (for August and beyond)

Every Yorkshire MAG member is invited to attend the Yorkshire Region Meeting and have your say in how the region is run. 10:00 at Venue TBC

An end of season camping and drinkathon, for the rally faithful of Yorkshire and beyond. With Bands, DJ's and comedy. Dene Park, Sports and social club, Dunswell, Hull. More details at: http://east-yorks.mag-uk.org/

7:30pm at The Cross Keys in Morley, West Yorkshire

Meet 8:30am (to get clues/instructions) at Redbeck Cafe, 339 Doncaster Road, Crofton, Wakefield, WF4 1RT (Treasure Hunt will leave at 09:00am prompt) £1 per entrant (to cover cost of prizes). Arrive with a full tank of petrol

See the events page for further details and more !!! 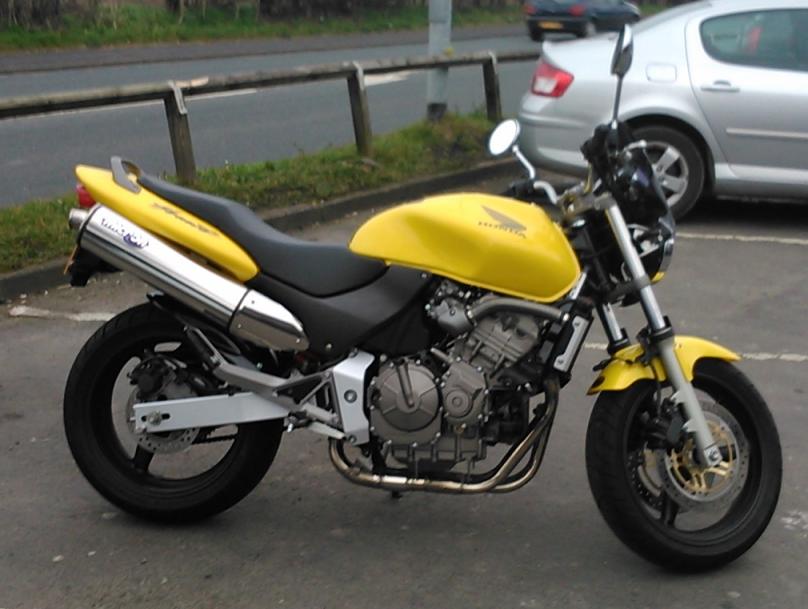 That's all for this month, and I hope to see you all soon.


Wakefield MAG meet at the Grey Horse, Kirkgate, Wakefield at 8:30pm every Wednesday. New (and Old) faces are always welcome.